Breakfast at the Provencal Market 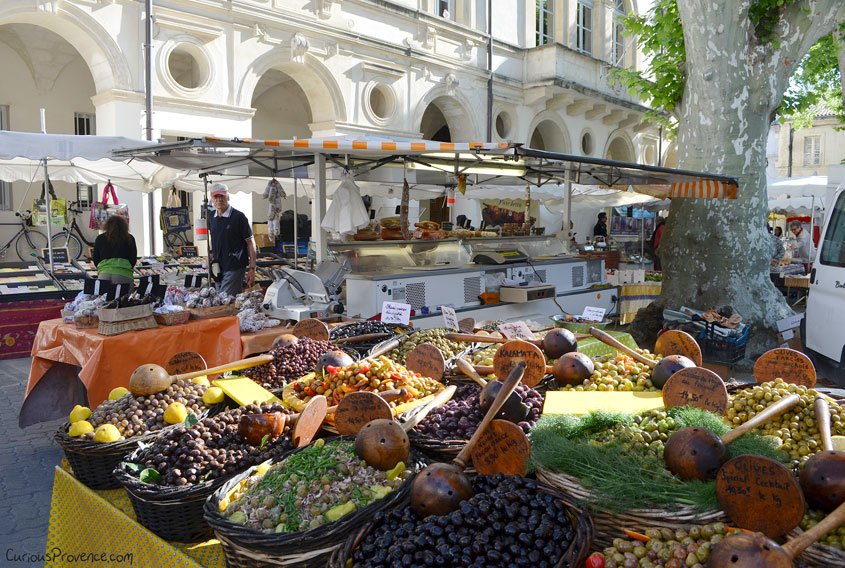 It’s lamb again for breakfast. The fishermen are already pouring the wine. They’ve been up since 4 am. Anyone who wasn’t greeted upon arrival two hours earlier makes their joking complaints. A flurry of three kisses on each cheek to everyone within reach follows.

It’s 9 am and we’ve finished setting up the stalls. The fish is carefully displayed, the cheese unwrapped. I’ve bought olives from the olive vendors, meat from the butcher. As the guys slowly arrive to the usual breakfast spot, I continue stuffing tomatoes. They’re dilly dallying. Who’s got the cups? Which cheese should we have? 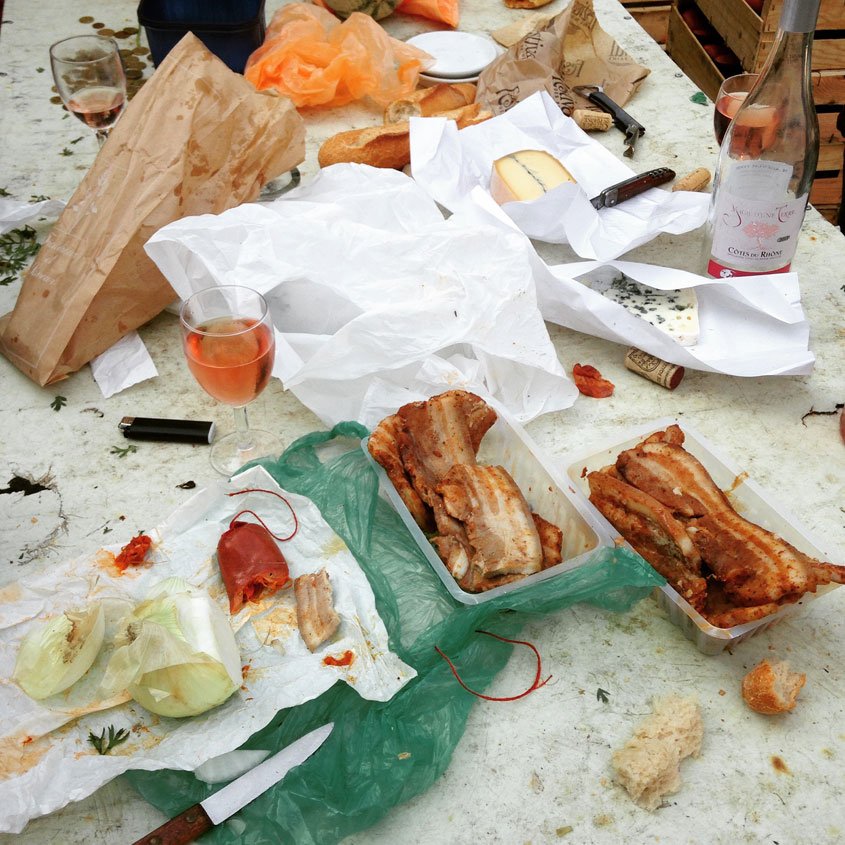 Meanwhile, the lamb chops are ready. They’ve been dusted with Herbs de Provence. Crude sandwiches are made with lots of mustard. Boxed wine appears from all angles and someone didn’t realise it was already decided. They bring shavings of all sorts of charcuterie. Xavier throws a piece of 24 month aged Comté onto the back of the truck- our table. 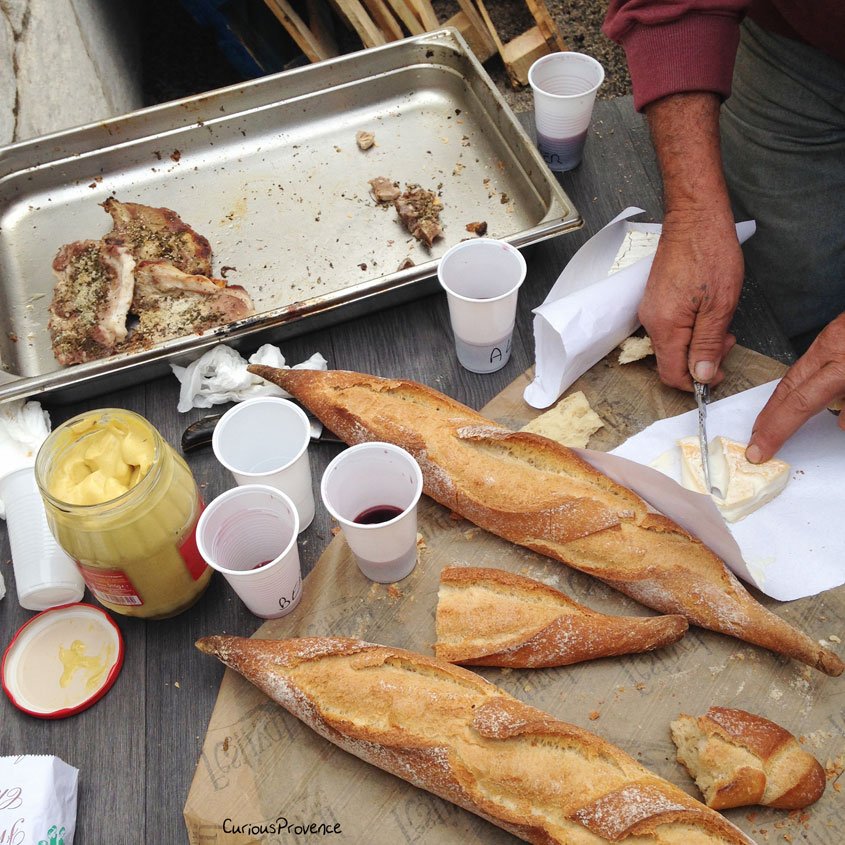 Le Placier stops by for a glass of red. A government worker, he doesn’t even try to sneak it. The king of the market. He arrives earlier than all of us. He directs stallholders to their places. Many surplus stallholders show up in the hope that one of the regulars won’t show. There’s spats of disagreement. A touch of unfairness. The vegetable stand next to us always tries to sneak a few inches. Here in St Remy de Provence, they say inches are gold.

You’re awarded what is considered to be the best spots in the market according to how many years you’ve been coming. Many have been working here since they were kids. Their parents were forains. Les anciens. That is the group I’m breakfasting with.

These are the hardy men that work every morning during the summer months. They sell “la bouffe” or food. The highest earners and the hardest workers. They’re here all winter long just to secure their spots for summer. They breakfast well in the summer, but the winter, now that’s another story.

Despite this apparent work ethic, they’re still French. Sharing a hearty breakfast together is a rite of passage. Most of the business owners employ women as their sellers. Some days, there seems to be a competition of how well you can treat your employees. I’m reminded why I moved to this country.

With an impossibly English name and a lack of French slang, I was, at first, very much an outsider. An eyebrow was raised when during my first day, I took the offered glass of wine with my pork chop.

Then, one day, it was my turn to bring breakfast. I made daube, the provencal version of Boeuf Bourguignon. I stewed the beef for 6 hours and added cinnamon, chilli and prunes. I ladled out the rich deliciousness into bowls. They were passed around with a certain curiosity. Inquisitive looks crossed their faces as they chewed. The French aren’t known for their adventurous eating. Without words, a couple of them came over to me and kissed me on the cheeks. The second time that day. It was labelled “Daube à la Canadienne.” Things were different after that. 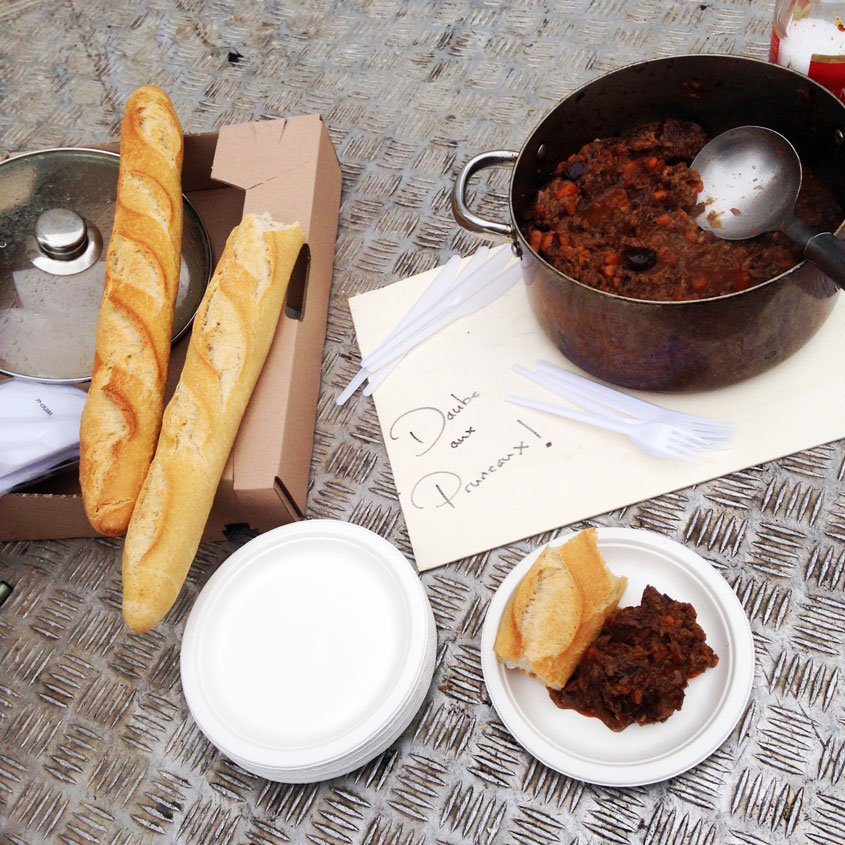 It’s starting to get hot and someone suggests melon for dessert. The vegetable stand throws over a contender. It’s decided, with much sniffing, it isn’t perfectly ripe. The next one is. “Just testing you” the stallholders says.

The customers start to arrive and we leave our improvised table to get back to work. I wipe melon juice off my chin and someone says, “la vie est belle au marché n’est-ce pas?”

You can always explore the French markets on your own, but if you really want to learn how to navigate the markets and select the best produce, why not join Chef Eric for a French Market visit followed by a cooking class in Uzès?