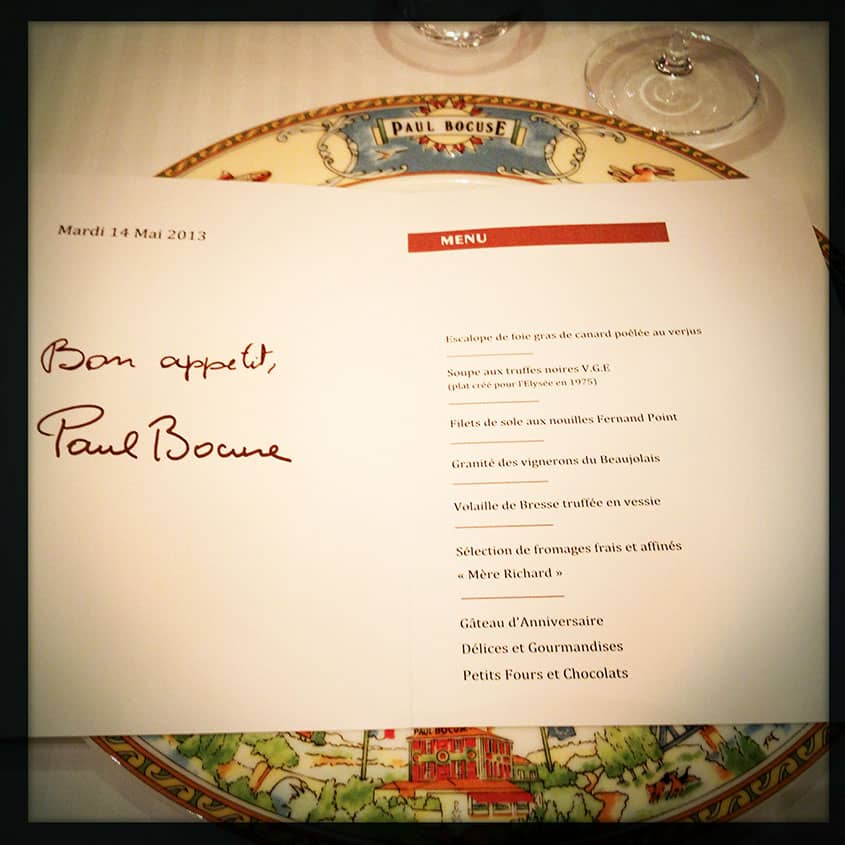 A burner flame went out this past weekend. When a call from an RTL journalist asking Eric for assistance with a reportage on chef Paul Bocuse and his influence outside of France comes in, you know that it was an important flame. The culinary world is in mourning as one of its greatest masters has left us. At age 91, Chef Paul Bocuse lived a life and career, that many dream of, but few will attain.

Paul Bocuse’s influence and renown stretched far beyond his restaurant, L’Auberge du Pont de Collonges also simply known as Paul Bocuse in Lyon. Some referred to him as the Pope of French gastronomy.

My very first French cookbook (en français), was gifted to me by my French host family over 20 years ago. They knew I loved to cook and wanted to offer me a piece of French culinary history. It was the “Cuisine des regions de France”,  by Paul Bocuse – a culinary Tour de France. While I never got through all the recipes, there were a few that I did try and the book has never left my possession.

I was already a fan of the city of Lyon – it’s architecture – it’s cuisine. The city had long held the title of the culinary capital of France and while today, some may argue that that title has moved on to another French city, no one can deny the influence the city still holds, thanks in part to chef Bocuse. With Lyon, being only 2 hours drive from Uzès, it is a pretty easy trip to make when the desire hits us.

I was 3 months pregnant with our son when I met Monsieur Paul. Eric thought it would be a great idea to take me to his original restaurant in Lyon for my birthday. I joke that it was more a gift for him than for me. At that stage in my pregnancy, only just having regained any sense of taste and basically feeling stuffed all the time, the rich classical French meal that was in store for me was maybe a tad too much. But how can you argue with a chef, enamored with another chef? You can’t! I didn’t – I just went with it. And I have no regrets.

It is fitting that the Auberge was both the place of Paul Bocuse’s birth in 1926 as well as the place where he earned his first 3 Michelin stars.

You don’t dine here to enjoy Modern French cuisine. This is for the lovers of classic, rich, creamy French cuisine. It was a feast fit for a queen. The food just kept coming. 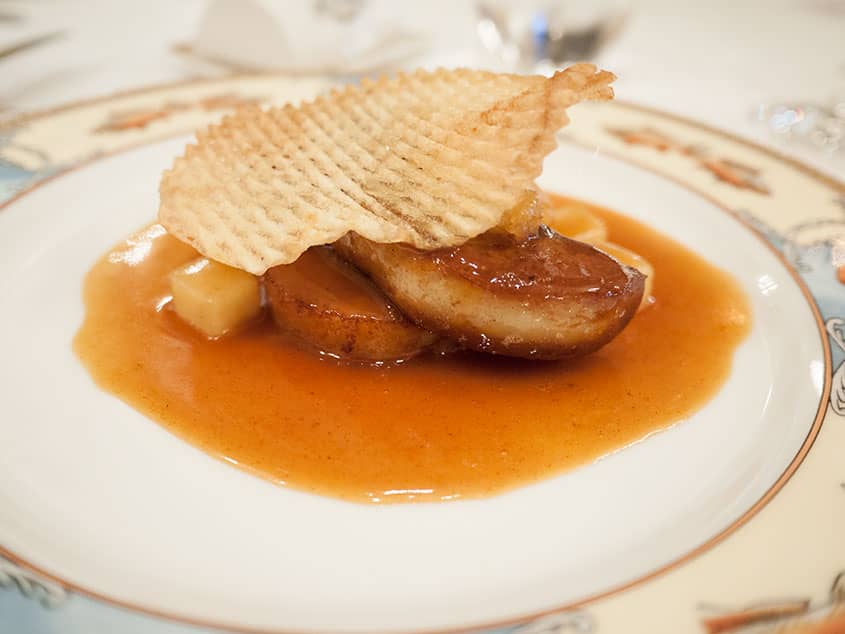 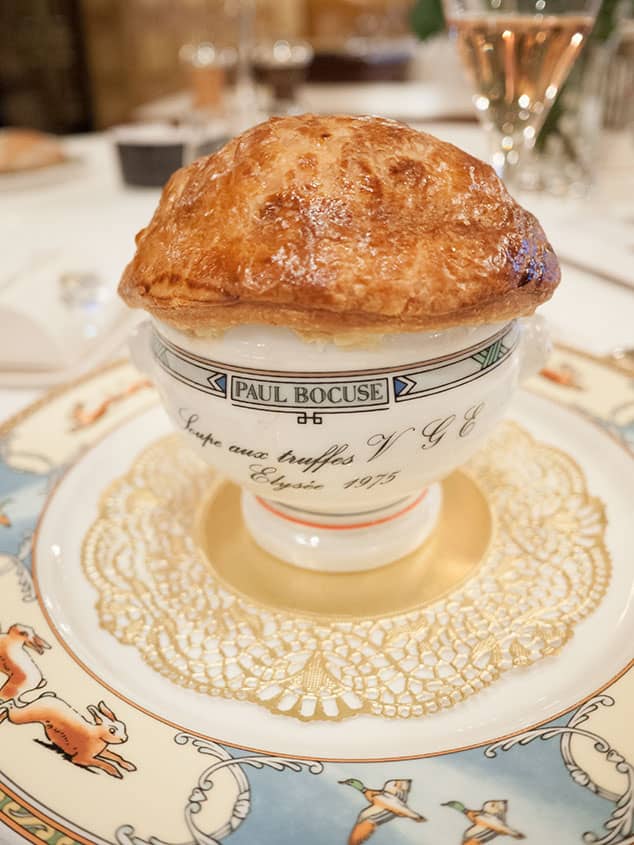 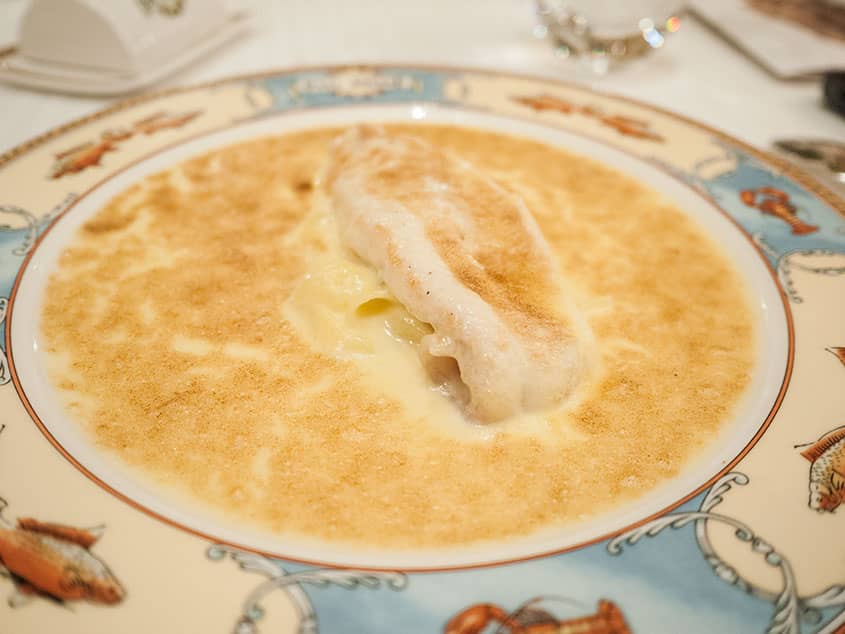 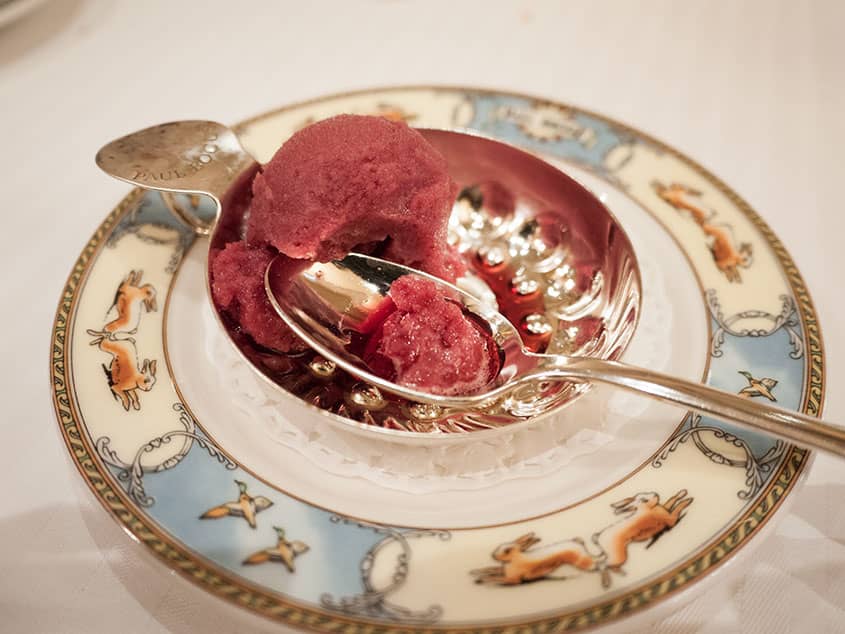 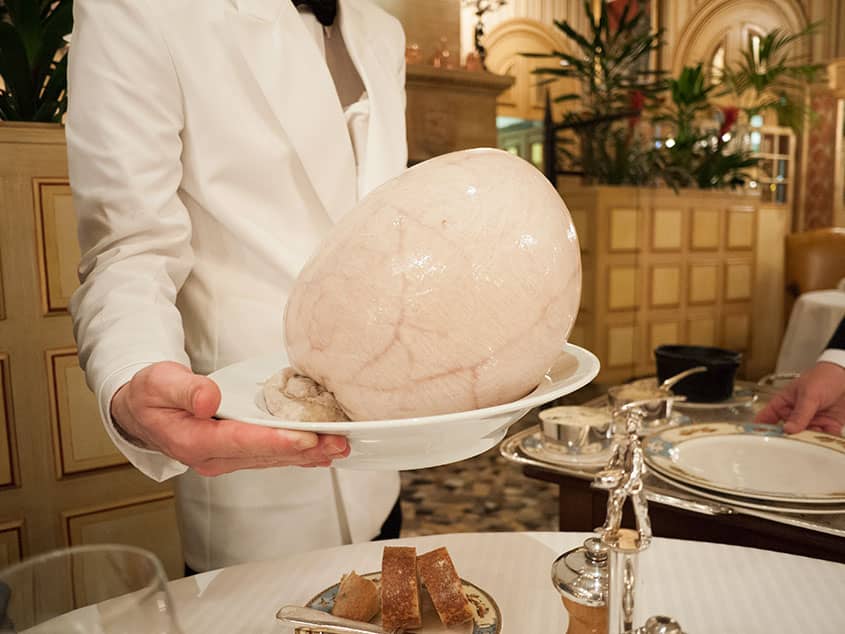 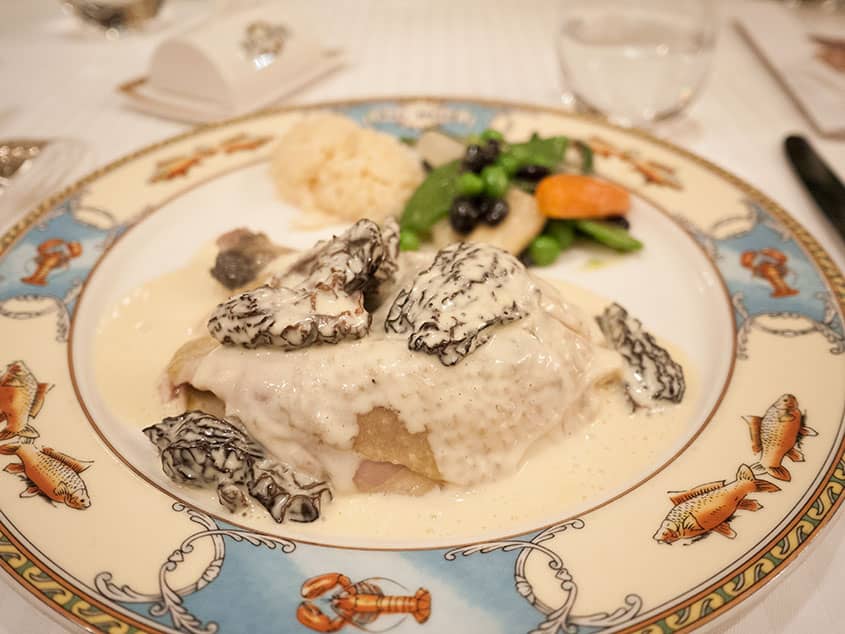 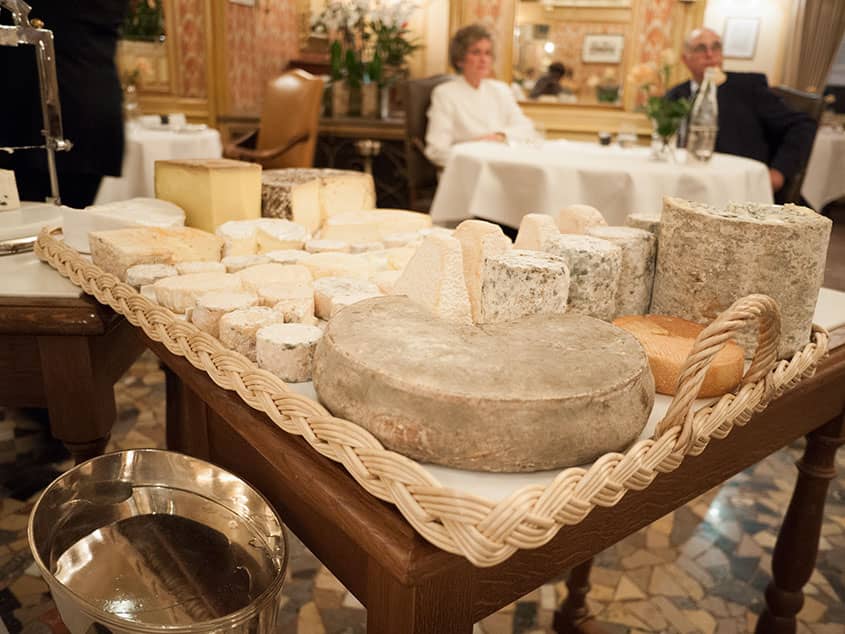 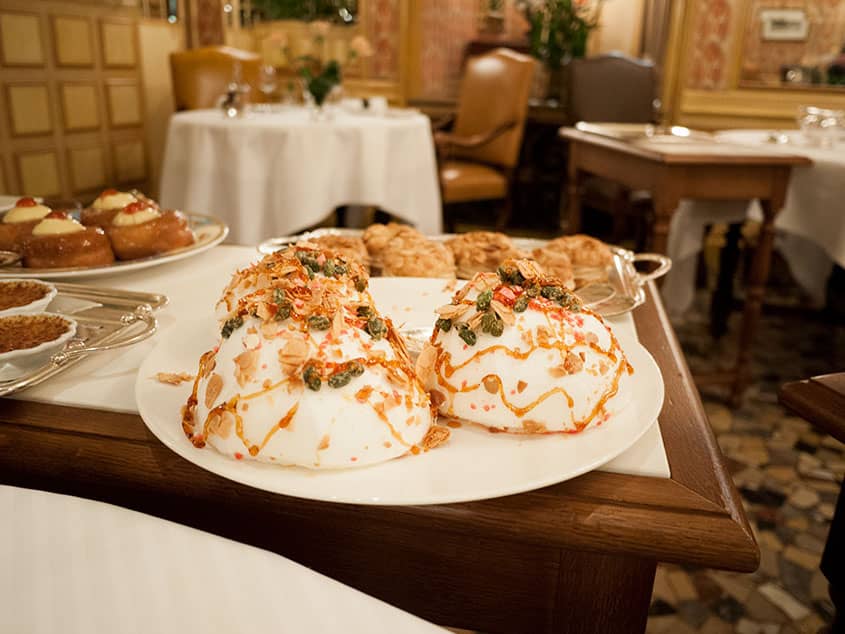 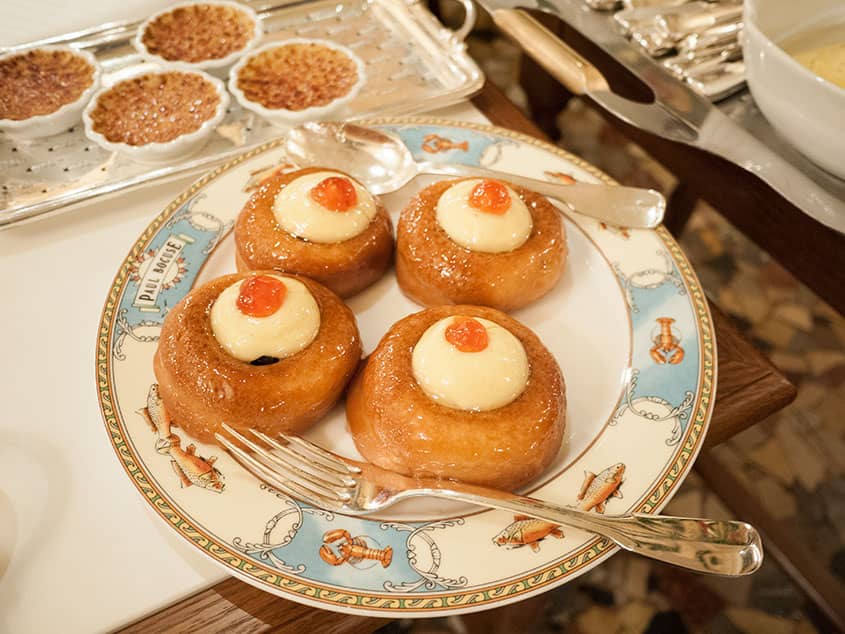 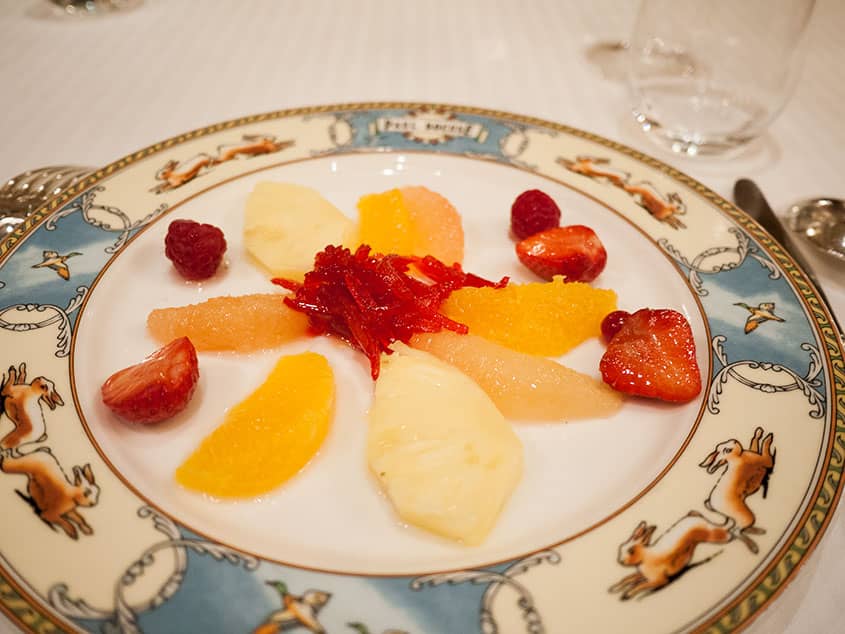 We even had the opportunity to visit the kitchen run by not 1 but at least 4 MOFs. This was the stuff of legends.

And speaking of legends: I was sure that I had seen a ghost. I had come with little or no expectations for the evening ahead but then, I thought I saw him. But, no, it couldn’t have been him. But it was! Monsieur Paul came to our table and wished me a happy birthday. I was stunned. It’s not every day that you get to meet the Pope after all. Just wish the waiter’s hands could have been steadier when taking the photo. Ah well, I still cherish this encounter. It took his passing for me to go back and review my photos but the memory is forever impregnated in my mind. 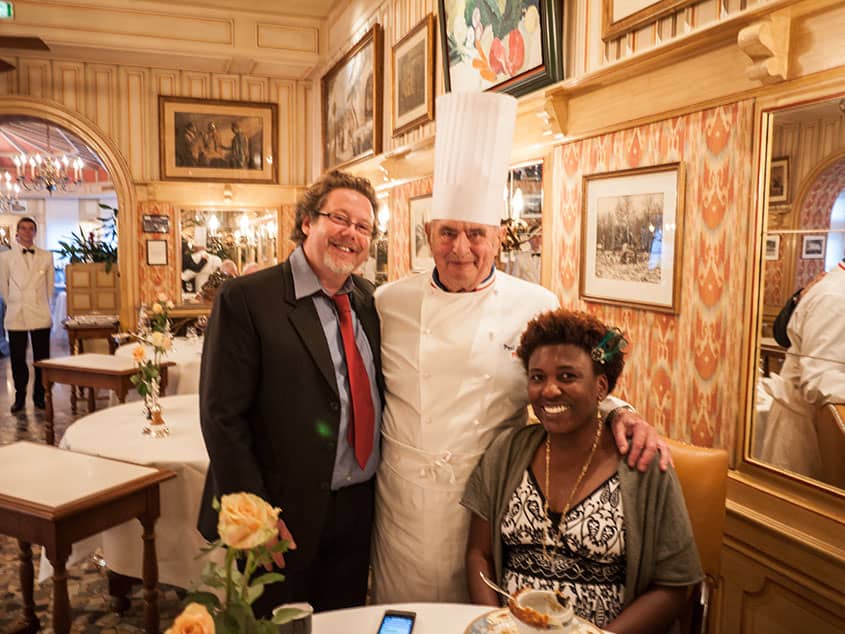 Monsieur Bocuse was a 3-Michelin-starred chef for over 52 years! He built an empire that stretches across at least 3 continents. He is even at Disney! He has an extremely prestigious culinary award, the Bocuse d’Or –  a much coveted international culinary award, was named after him and he will be missed. With all the accolades that he has received throughout his culinary career, he remained a humble man. Not too proud to have enjoyed a coq au vin made by our very own, Chef Eric and to offer him his compliments.

The angels will dine in style henceforth. Merci Monsieur Paul.

A 2-day virtual bread baking course taught by chef Eric. Master the art of bread baking from the comfort of your home kitchen. A bread-baking course for all lovers of great, homemade bread. Come bake delicious bread with us!
120€ / person for 2 days
BOOK NOW
View all Courses