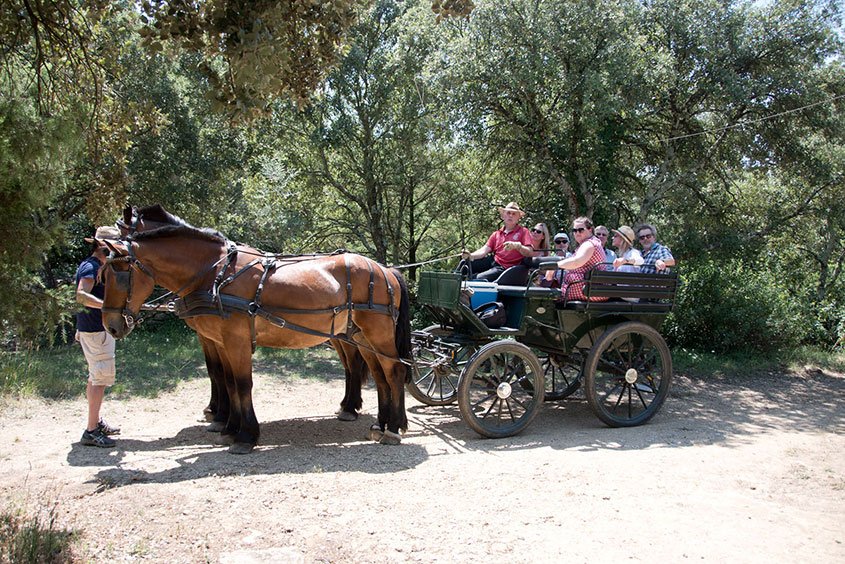 Have you ever dreamed of riding in a horse-drawn carriage? It was with great delight that we ventured on a tour of the French countryside with our guide headed a picturesque village for an exclusive picnic. Amazing right? We certainly thought so. This is just one of the locations that our Week in Uzès students will have the opportunity to visit during our 5-day French culinary workshop. 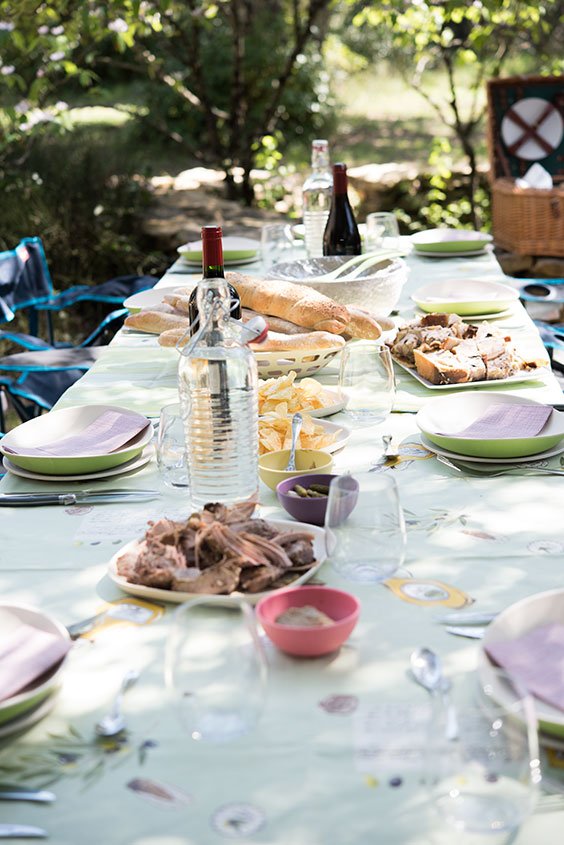 You could call Emmanuel Pédeneau the “horse whisperer” – you would not be entirely wrong, though in reality whispering into a horse’s ear is great for show but is not going to get him trained and ready to cart a carriage full of travelers to their destination. This was just one of the many facts that he shared with me during our very first ride together to the Pont du Gard during our first week in Uzès. Emmanuel tells us a bit about his passion for horses and organic winemaking. We chatted, we shot photos and occasionally stopped to taste wild mustard along the road. Yes, that’s right we dared to eat random (for us but not for Emmanuel), plants on the side if the street! And I even got a lesson is carriage driving and everyone survived! What more could a girl ask for? 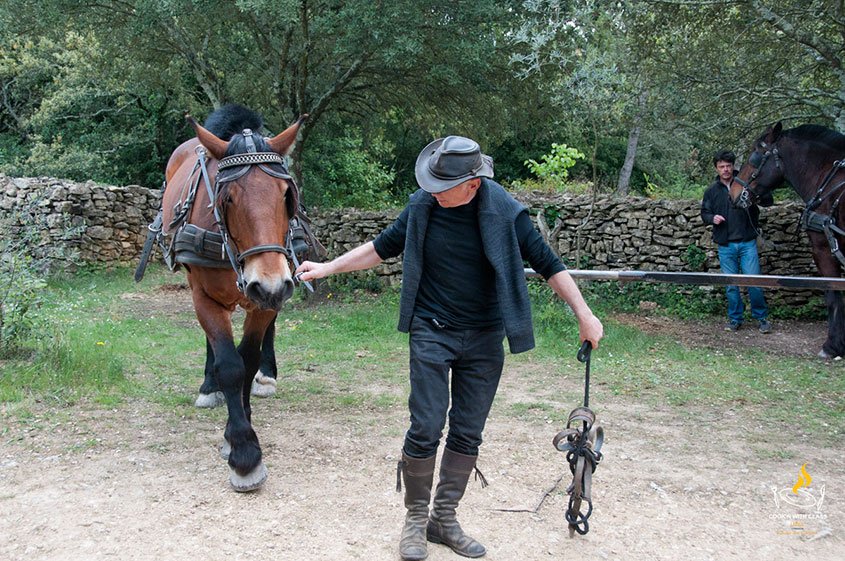 We are always in good hands. Emmanuel is a man dedicated to his craft. He tells me that his family always had horses and though he took a break from them in his early 20s, his passion was once again reignited when he and his wife bought a horse for their kids upon moving to Arpaillargues (in the Pays d’Uzès) in 2003. He wanted to breed and raise horses. This led to proposing visits of the region, assisting brides and grooms in making grandiose entrances on their wedding days & now, wine production.

Being a compassionate and eco-conscience person, Emmanuel decided that he would purchase the land next door in order to grow grapevines and work the land only with his horses. He has been tilling the earth exclusively with his horses since 2013. Why? Because he wanted his entire exploitation to be about and around horses. As he states (in French), on his website L’Écurie Font Clarette, horses aren’t replacing tractors on farms but rather they are the choice for certain. farmers who want to work the land gently and with respect. Well said!

But what type of wine is he making from his organic grapes? The Carthagène – a mistelle, (an alcoholic beverage where the fermentation of the fruit juice has been stopped by the addition of alcohol), like Absinthe, was once interdit! (forbidden!). It’s commercialization which consists of 3/4 grapes & 1/4 alcohol, was restricted by the government. Though farmers were allowed to produce it for their own production up to a total of 1000 degrees of alcohol per harvest, public consumption was not tolerated mainly because each producers recipe was unique and therefore uncontrollable in terms of levels of alcohol. Thankfully, they got their act together and we can now enjoy Emmanuel’s carthagène.

We have since changed our picnic venue to lessen the distance and also provide for a more secluded location. We take a special route which makes the distance longer than it would have been had we chosen to go by car, but the distance (about 45 minutes ride), is not bad at all and when you arrive, the magic begins. 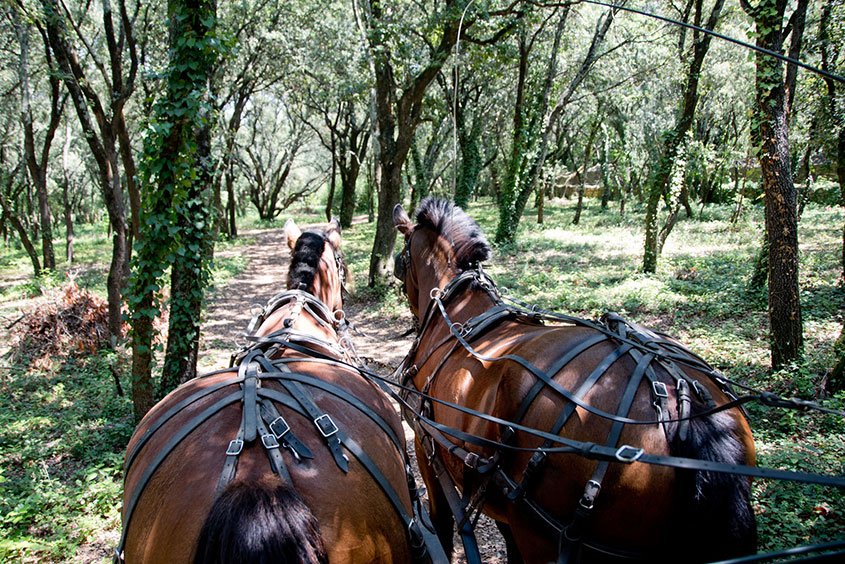 During the course of our picnic, after tasting some of the delicious foods they have whipped up in the week enjoyed with local wines, we always remember to leave a bit of time for a real treat the carthagène tasting – Now Emmanuel only speaks French but we are armed our sommelier who expertly translates the technical terms for us.

We learn that thanks to the alcohol (and relax, it is only 16-18% alcohol!), you can keep an opened bottle (recorking it of course), of carthagène for years and it will never change. 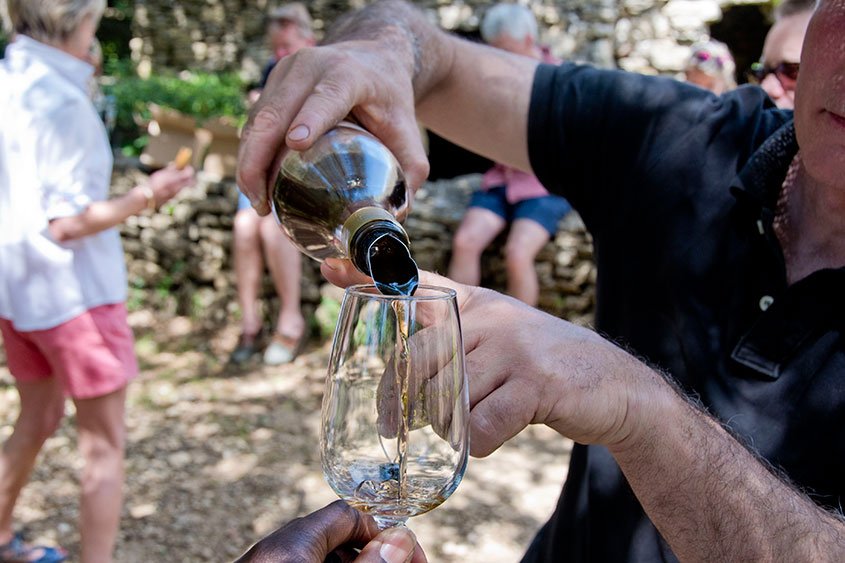 For Emmanuel, his horses are his pride and joy. It is an emotional bond and he says that he feels part of their herd. He is in perfect harmony with his horses. One of the lady’s in our group was upset that he would use his whip to encourage Ulysse and Titan to advance – you see one of the two was being particularly lazy letting his brother do all the work, he reassured us that he was not at all hurting them. I felt completely at ease with this man who clearly loves these animals who in turn regarded him with respect.

Some pairings you can try with a bottle of Emmanuel’s carthagène: Foie Gras, cantaloupe or figs and Roquefort. What a treat!

You’ll be sure to find Emmanuel as part of our future Week in Uzès – French cooking holiday program, but you can also contact him via his website if you want to book a tour, join him on one of his informative picnics or have your horse trained. A delightful individual with a delicate touch. 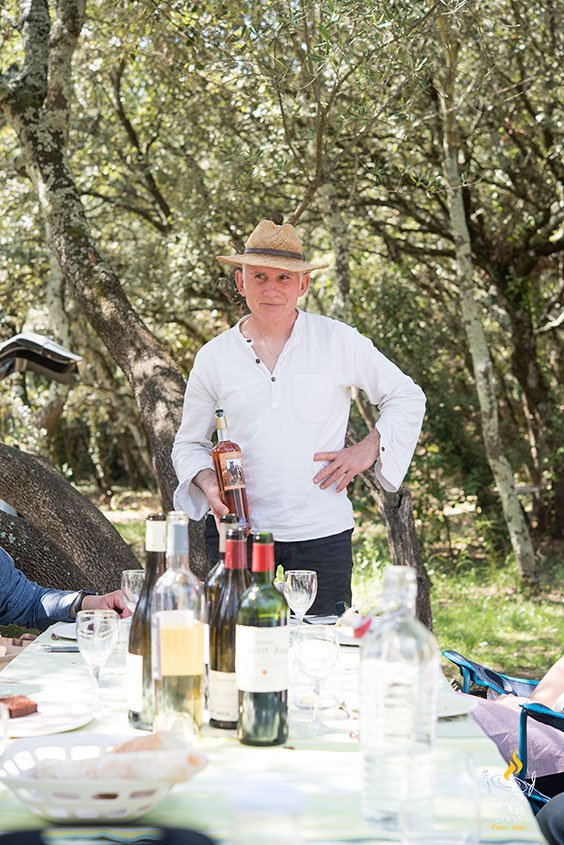 
Join us for a Week of cooking, touring, and tasting in Provence – Week in Uzès