Many dream of a move to France, but while such an idea remains but a fantasy for some of you, there are those of us who have taken the plunge. Think of it as inspiration to give you the courage to do the same. A journey not free of obstacles but certainly full of its fair share of rewards. Check out part 2 of Ashley’s move to France in her latest post. If you missed it, you can catch the first part of her story here.

Our first year in France was a kind of like self-inflicted purgatory. Unbeknownst to us, it was to become an experiment in rustic living. We arrived, wide-eyed and oblivious to the pay we would be receiving, or what indeed our job entailed. We had taken a gamble on gumtree and used the fact that someone was interested in entrusting us with their chateau as a good omen. Guardians. It’s an umbrella term for anything from house sitting, to housekeeping, gardening or managing rental properties. It was a job and a roof in one.

After 5 years of long-distance dating, we would be together. We would be in the South of France. The first gentle step into making a life here.

The property was like the secret garden. The carefully planted gardens were overgrown, unattended to, being taken over by weeds. The basins that connected throughout the property were choked with calcium or empty. The long-retired Camargue horse, from the nearby riding school, scratched his back against the fruit trees and was fat to excess with all his gorging on the fallen fruit. Before we arrived, we had been sent photos that were twenty years old. 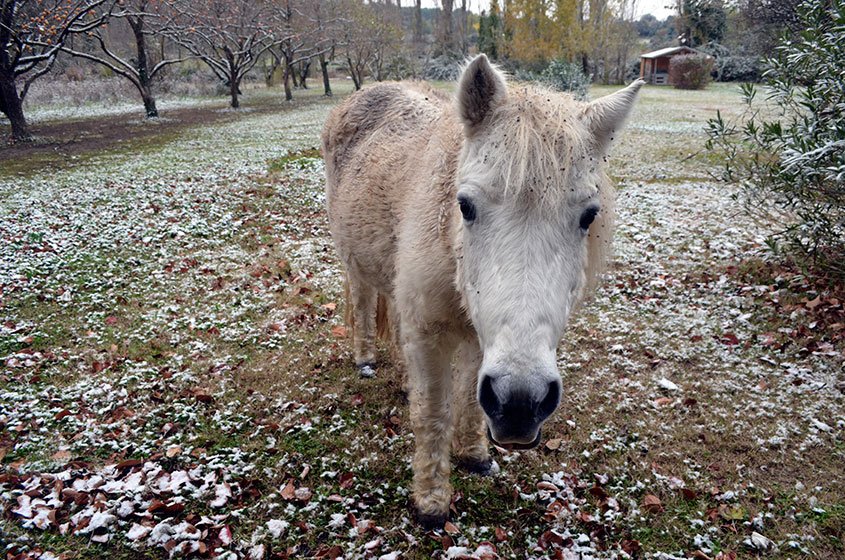 The insides of the main house and many depending houses were left to rot during the wet winter months. The owner used a water jug and basin to wash in the morning as there was minimal plumbing. The electricity was dangerous. All the walls were covered in cloth that soaked up the damp. The antiques, sadly repainted in 80s fashion, sat untended to and falling apart. The hallways featured statues with large sheets on them, a frightening sight in the darker hours. We learned that the owners had many houses like this, sadly decaying.

On the first night, we were pointed in the direction of where we would stay while waiting for the former guardians to vacate the guardian house. A small dwelling at the end of a magnificent plane tree alley. We opened the door to find a little cottage decorated as if it were an 18th-century palace. On closer inspection, we found that the sheets on the canopy bed hadn’t been washed for seemingly years. Enormous spiders hung on the ceiling. we’d never seen such large specimens. I’m still traumatised from when I found one clinging to the toilet roll in the middle of the night. The windows were left open all year so we had to introduce ourselves to the resident rodent family under the bath. We drank a lot of rosé those first few weeks. Comfort was found in the local food. At night, we moved to the tiny couch, praying the spiders wouldn’t descend. We’d leave the radio on in front of the fire so we didn’t hear all the animals rusting around in the bushes outside.

Perplexed, we tried to figure out what we were doing there as the owners of the property prepared to leave while dodging our questions about pay and responsibilities. We were to be house sitters, with the occasional raking of leaves and extra painting job here and there.

The first night they left, an enormous tree cracked in half. It was our introduction to the Mistral wind. I’ll never forget that sound. Robin ended up sawing it down by hand. 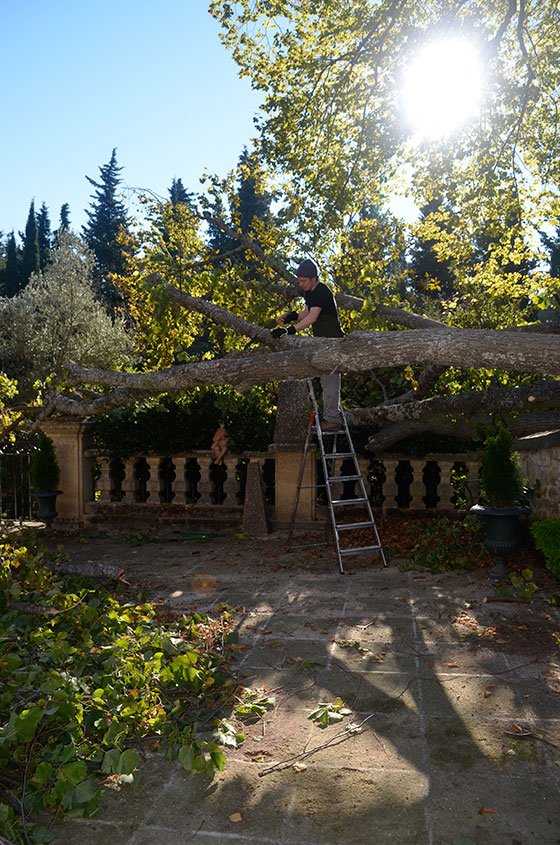 We were living with nature in a way we had never expected. We lived without heating and woke up to count the slug trails that had decorated the walls while we slept. We learned to bang out our shoes before we put them on as scorpions were fond of making beds in them. The gorgeous sound of the Grand Duc owl living just above the cottage beckoned us outside every evening at 5 pm. The squirrel woke us up every morning by dropping nuts onto the roof. Seeds pods from 100 ft tall wisteria exploded and shot their seeds into our wine glasses. I learned to spot edible flora and fauna. I squealed with delight when I found my first wild onion. Robin, meanwhile, was convinced I was going to poison us! 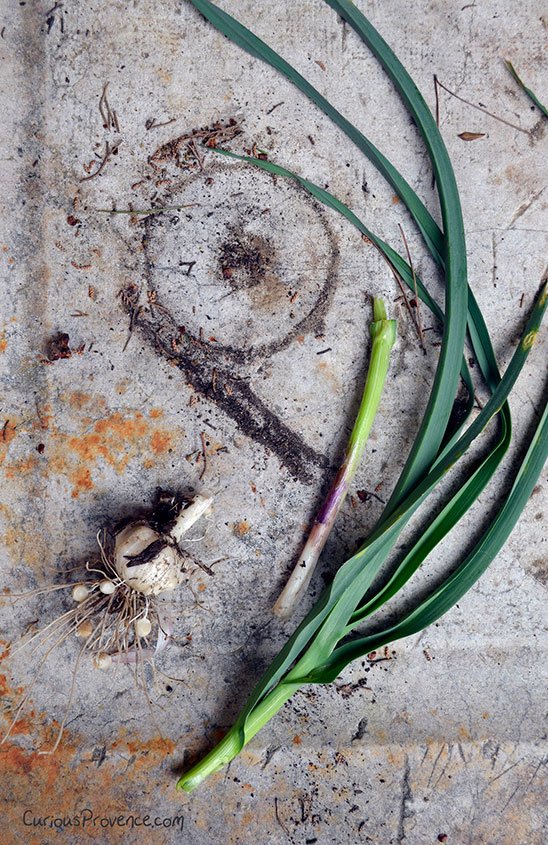 In our fervour to occupy ourselves, we set about to try to make the property come alive again. We pruned the 150 fruit trees in a kind of masochistic devotion and hope that they would bear more fruit in the coming year. We raked years of leaves from under bushes. We weeded on our hands and knees for hours. We rodded drains so that the apartments would no longer be flooded. I made a garden out of half of a field; breaking the soil by hand and growing seedlings in the neglected greenhouse. With absolutely no gardening experience, I puzzled over the simplest things such as which way to insert the seed into the soil. It turns out that it depends on the seed! We bought 3 French chickens and named them British names. I made jars and jars of jam, tomato sauce, chutney, soup, etc. I picked walnuts and left them to dry. Parts of this rustic lifestyle were indeed idealistic, but we were stressed about funds, about moving forward. 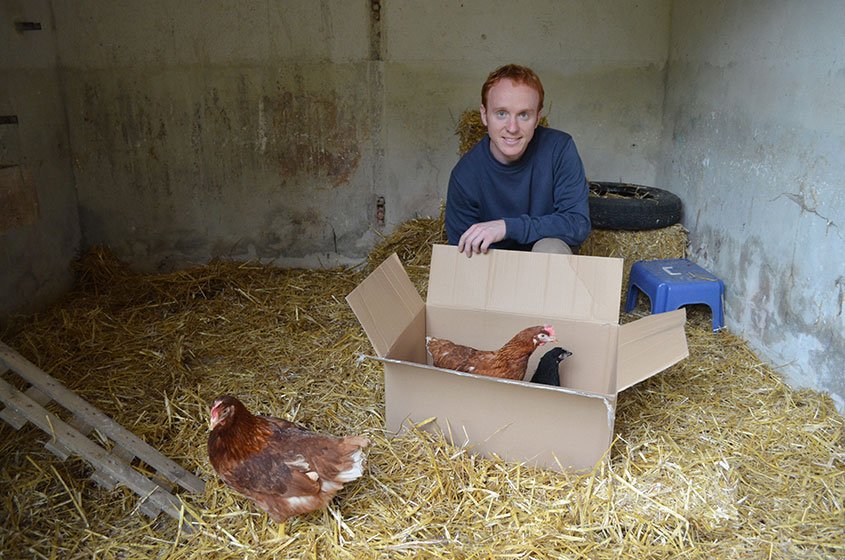 With little money, we weren’t in France, we were living in the microcosm of our own little world on this property. We tried studying French. We had trouble meeting people. We didn’t have a single contact in the country. Everything we were lacking I started to associate with France. All of a sudden the negative aspects of our situation and the French way of looking at things were impeding us assimilating. We needed to get out of that situation. The first year that you move somewhere new is exhausting. You’re trying to deal with all the new social faux pas, learning a new language, lacking in self-confidence, and being in a new environment. You’re constantly asking yourself if you made the right choice; you’re homesick.

Someone once told me that there is a three-year rule with expats. Only after three years, do you really start making friends and finding your place in this new society. In our case, that was very true. After three years, we’d finally managed to buy our own house and renovated it ourselves. We learned to reach out to expats, and their French friends. We can’t imagine living anywhere else now. How would we function without the fresh goat cheese, the olives, the succulent fruit!? And the best of Provencal cuisine.

That year we first lived in Provence seems like a lifetime ago. We learned a lot about ourselves. When you move somewhere new you inevitably experiment with who you are. Only after a few years do you find yourself again, improved- of course! So if you’re thinking about taking the leap, have faith and a lot of patience.

When you live somewhere, the place starts to become a part of you. The other day, the butcher in the next town got teary-eyed when he told me how much he loved a certain drive in the countryside, I got teary-eyed too. This is my home now too. 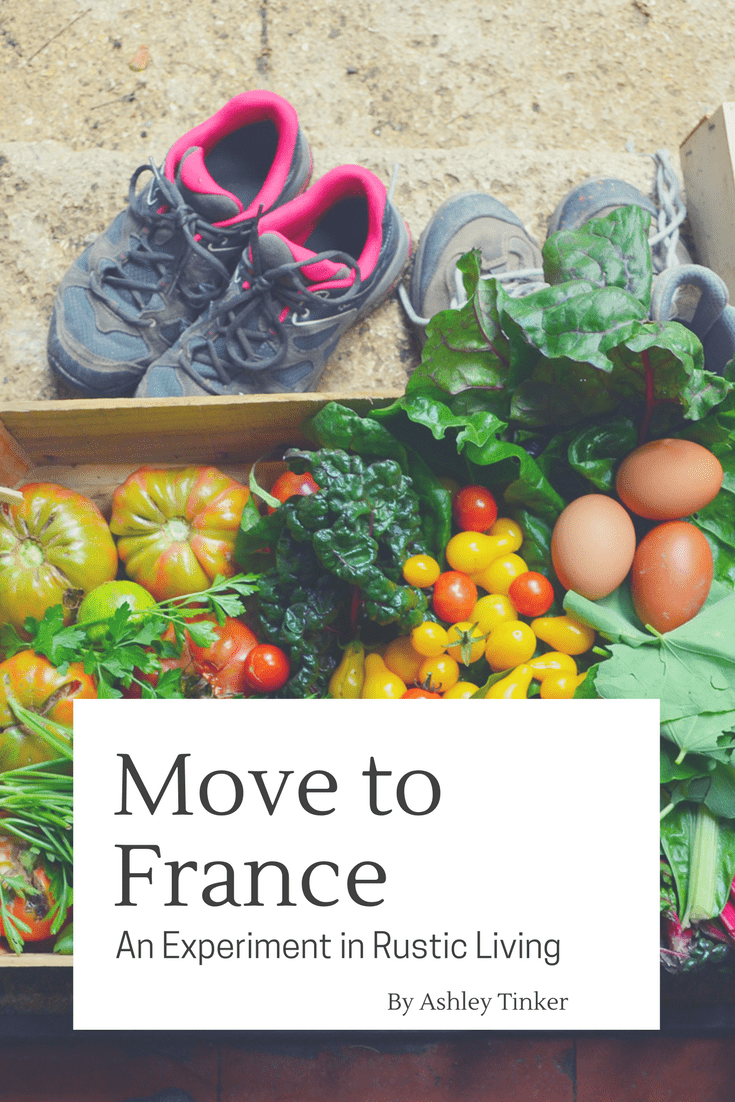 What better way to immerse yourself in French culture when dreaming of your move to France, than through a French cooking class with an experienced French chef. Join one of our classes taught in English in Uzès.