A trip down memory lane – Deborah, the Barefoot Blogger, takes us along on a chocolate lover quest and clues us in on where to find the best hot chocolate in the pays d’Uzès.

When I started writing this post about chocolate, I thought it might be interesting to bring back memories of my very favorite chocolate experiences. There have been so many to sort through, but here’s a go at it.

Visions from years ago take me back to the 5&10 Cent stores my father owned in North Carolina. When I was barely old enough to reach the cash register, I could easily scoop out candies for customers from behind the glass case in the front of the store. Those days the “good” chocolates were sold in assortments in shiny boxes stacked on shelves. Candy counter chocolates I remember were wafer-thin and coated with multi-colored sprinkles, or they came as chocolate-covered raisins and nuts.

Later in my chocolate years, I discovered the most heavenly fudge in Cape May, New Jersey, made daily with fresh dairy cream.  In Minnesota General Mills was testing Pillsbury Pie Shops in a few shopping centers. Customers, including me, lined up to buy their velvety French Silk Pies. Ricotta-cream-chocolate chip cannolis with dark chocolate-dipped shells in New York’s Little Italy were totally irresistible, as I recall. Then there was that “pain au chocolat” at Le Grenier à Pain in Paris.

“So much time, so many places, so much chocolate.”

Now that I live in France, it’s not surprising that I would have my most exhilarating chocolate experience right here.

Just a few months ago I was entertaining new expat friends who were overnight guests at my home in Uzes. We drove to one of my favorite places to take people on a tour of the area — Saint Quentin la Poterie. The small town is famous for its potteries where you will often find craftsmen at work in their shops.

On this particular day it was quite blustery — as those who know “Le Mistral” can understand — so we bundled up with hats and scarves before we left Uzès. Walking along the narrow, winding streets of Saint Quentin, I knew the sharp wind would surely turn too cold for comfort if we weren’t prepared. 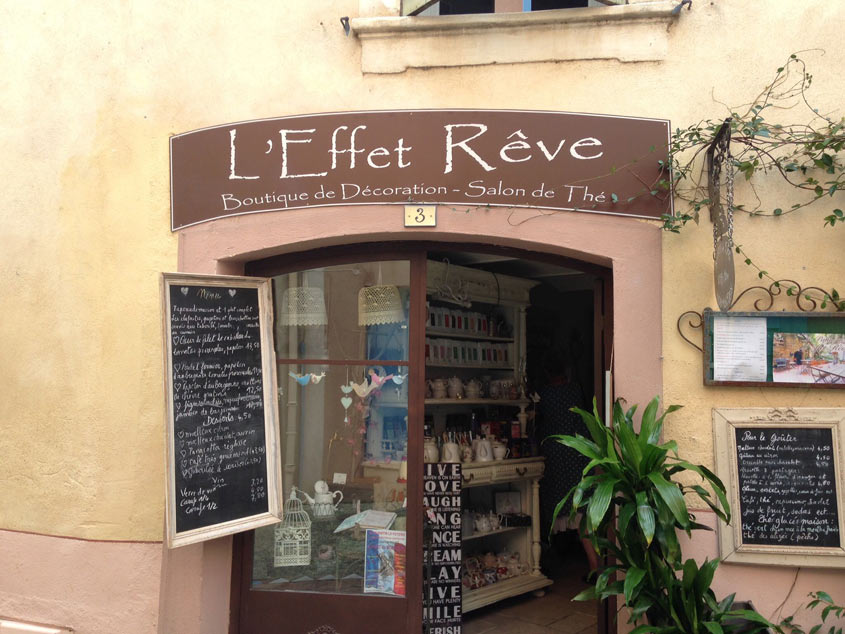 Arriving in Saint Quentin la Poterie and after looking through several shops, my friends and I ran across L’Effet Rêve , a tiny store where I had bought a few items for my apartment. I reminded them about the little daybed they’d admired at my place and I urged them to see the shop where I’d found it. 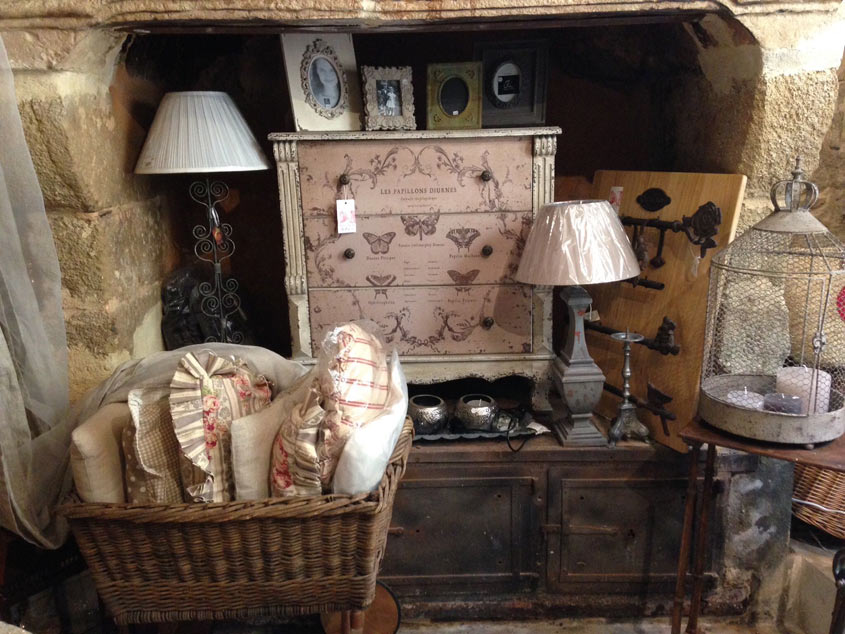 The sound of tingling bells announced our arrival when we opened the door to enter. Almost immediately, the shopkeeper appeared. As delightful as ever, she invited us in and asked if we would like a beverage? “ThThé? Cafe? Chocolat Chaud?”

“Oui” she said .. followed by something else in French.

(Let me stop here for a moment to confess at the time I didn’t speak French, even after two years living in France. That’s another story.) 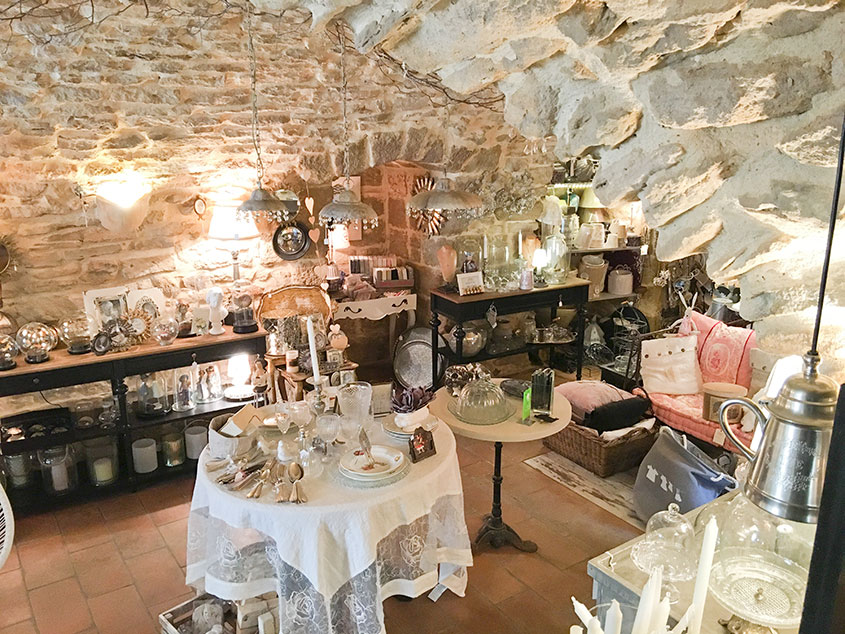 While I was trying to disguise the fact that I understood only one tenth of what the shopkeeper was saying, my friends told me later she makes the chocolat chaud from scratch. With melted chocolate.

After taking our order, the shopkeeper set off for the kitchen and we busied ourselves rambling through the store. As always it was filled with pretty little antique items and nostalgic home decorations; delicate lace items to wear; and an array of tableware, arranged tastefully with new and vintage linens. It was like visiting inside a life-size dollhouse. 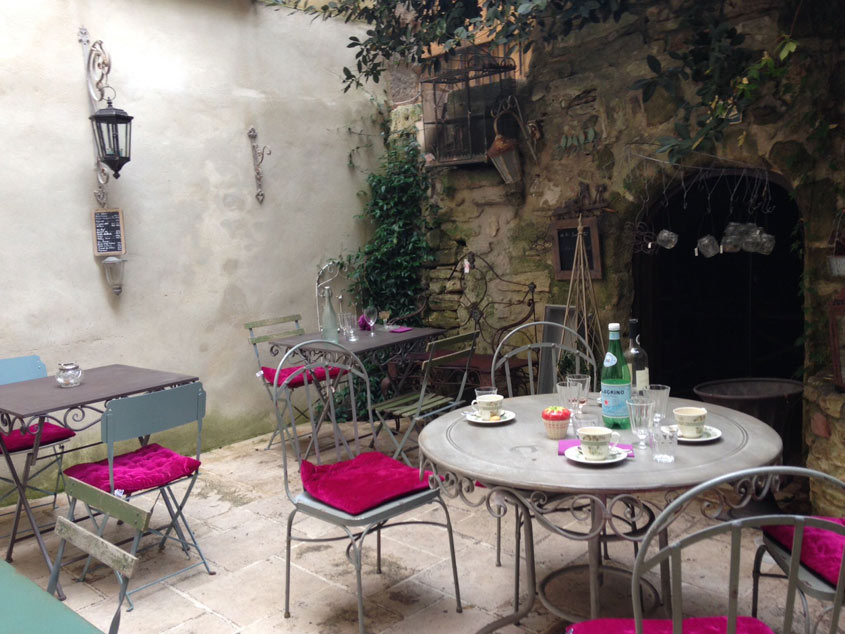 Just as I was lifting a wine goblet out of its place to examine it, our hostess approached and led us to a small alcove in the store. The cozy space was decorated like a parlor or Victorian sitting room. She sat us at a petite wrought iron table in the center of the room. When we removed our coats and were obviously comfortable, she brought from the kitchen the first of three giant cups of “chocolate chaud.”  She placed it in front of me. Then she served another, then the last. Each of the fine bone china cups was the size of a soup bowl. Each was filled to the brim with piping hot chocolate. Saucers beneath the cups held two dainty shortbread cookies each. 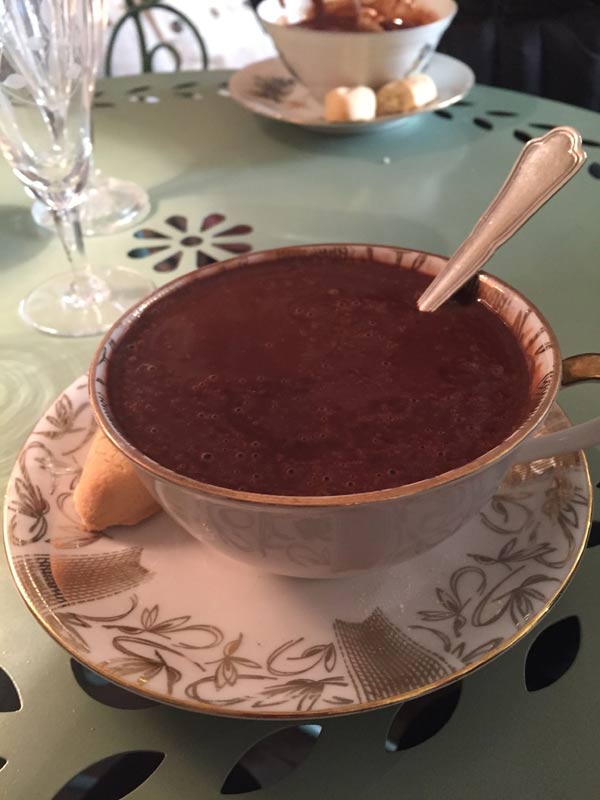 Holding my cup by the handle on the side, supported by my hand on the bottom, I took a sip of the heavenly brew. “Oh my!” I exclaimed. “Surely these cups with beautifully hand-painted, gold-leaf laurels have never held such a delicacy,” I said to myself.

With the first sip of the drink my taste buds burst wide open from the subtle sweetness; then the flavor of chocolate — deep, rich, cocoa. With a second, bigger sip the velvety liquid filled my mouth. I was delirious. How could anything taste this good? I glanced at my friends to see their reaction.

“This is the best ‘chocolat chaud’ I’ve ever tasted,” we all chanted.

When I turned back to closely examine what I had put into my mouth, I noticed how the thick, smooth mixture clung impishly to the sides of the vessel. Minuscule specs of chocolate floated on top and down into the center of the devilish concoction as I stirred the drink with a spoon. The consistency was like creamed soup, which caused me to take a few spoonfuls instead of sips. The taste reminded me of every piece of fabulous chocolate I had ever eaten. Memories were swirling in my head as I gazed into the masterpiece before me. 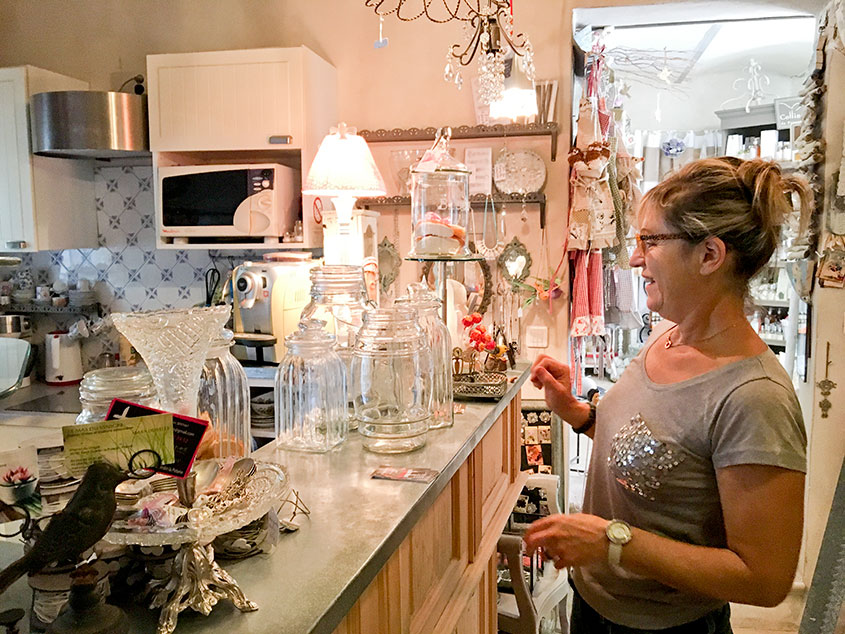 “Can I stay here forever?” I pleaded with the shopkeeper.

Switching between drinking and spooning the heavenly delight . . . and ignoring my friends and all around me …  too soon I saw the bottom of the cup.  It was over. That was it.

“It may be a long time before I taste chocolate this good again,” I said to myself, sadly.

“Lucky you,” joked one friend, “you can come back here anytime,” she said in a jealous tone.

“Exactement!” I exclaimed in my poor French. “Saint Quentin la Poterie is almost next door!”

Writers note: The Chocolat Chaud recipe at L’Effet Rêve is top secret. However, Chef Eric has a version of the rich dessert drink for you to try at home. Hopefully it will bring memories of your favorite chocolate treats, where you were and, perhaps, thoughts of a special person who enjoyed them with you.

Chef Eric has a wonderful chocolat chaud recipe to share with us here. 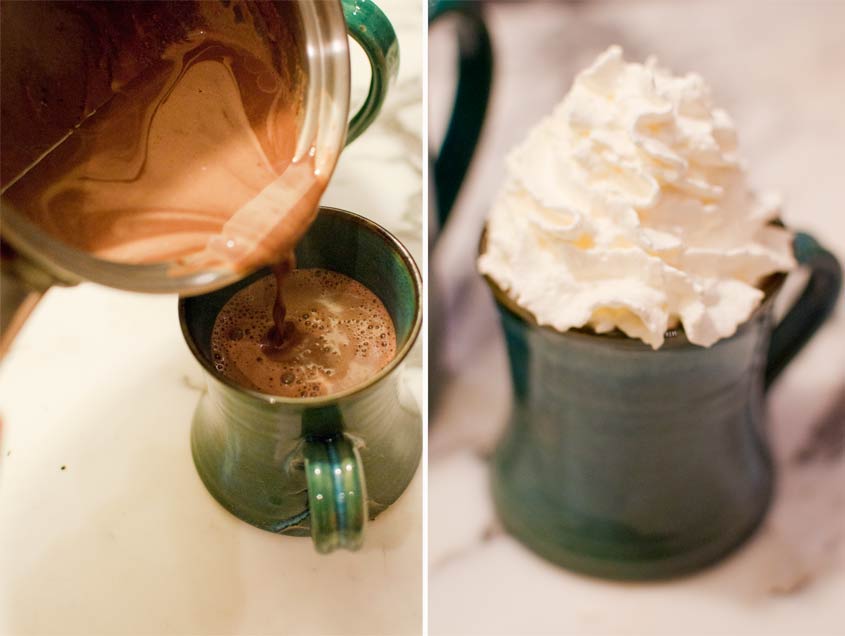