The 2020 truffle weekend in Uzès will take place from January 17-19, with the grand truffle market on Sunday the 19th. You don’t want to miss this if you are in town. Allow me to paint the picture for you of truffle weekends past. 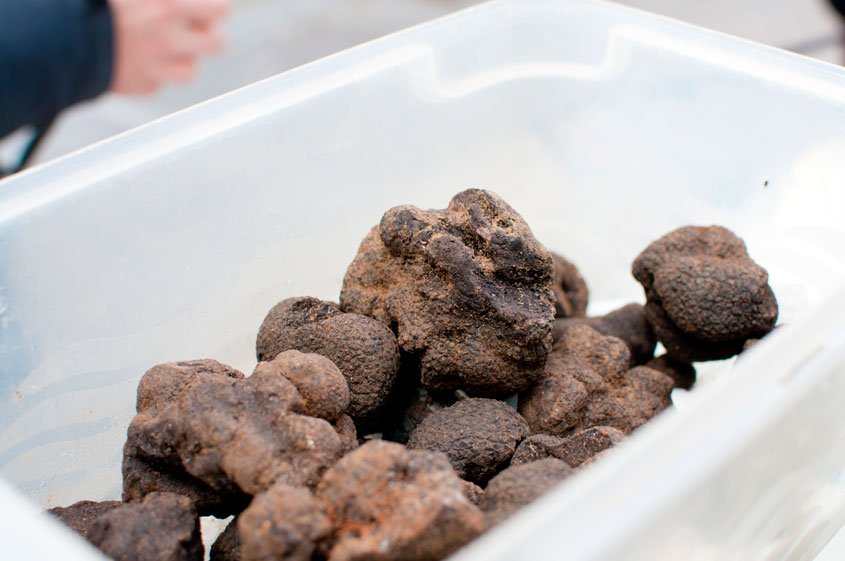 Truffles – the mere mention of this mushroom has some people swooning. Though I do like truffles I am not gogo gaga over them and at 1000€/kilo I have to wonder – is it really worth all that? It completely depends on how they are served to me but I had to get into the spirit of things when Uzès put out all the stops to celebrate the black diamond.

Truffle season officially started back in December and sadly we were not here to see the kick-off during the Uzès Christmas market but we did participate in the Weekend de la Truffles, which took place the 15th, 16th & 17th of January with a huge truffle market on the Place aux Herbes.

We happened to have friends visiting us that weekend – I thought it would be an ideal time for them to come while things were jumping in town. We all headed to the market on Saturday (as I mistakenly thought the truffle market was that day), and purchased a few truffles from Truffes d’Uzès as well as some snails filled with truffle butter from Cyril Santos.

I, of course, snapped a few pics of the merry truffle buyers that morning and gasped silently when they were how much their truffle purchase cost. 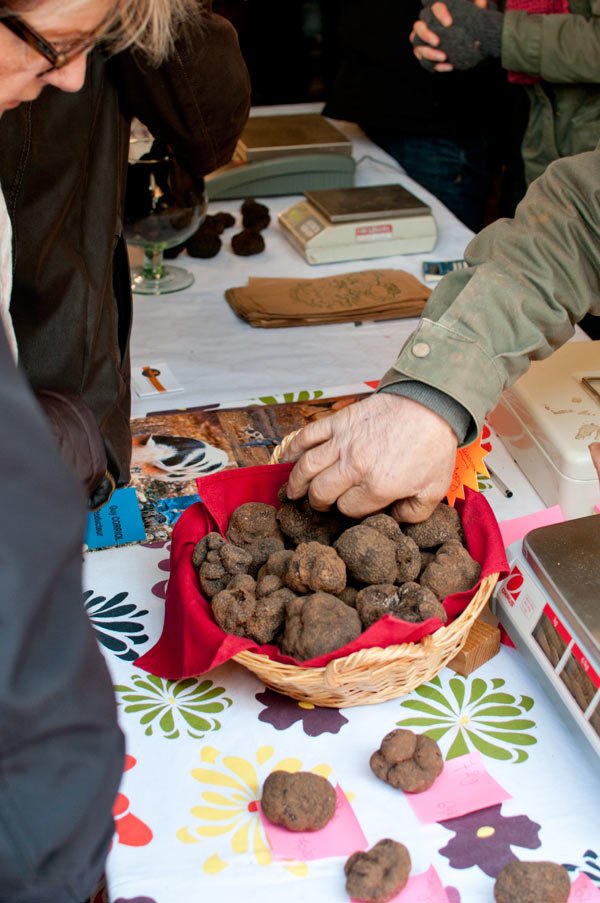 I happened to mention how I wished to meet my favorite chocolatier Pierre Marcollini, who has chocolate shops in Paris and in his home country, Belgium. I may be French now but I still think the Belgians have it going on when it comes to chocolate – sorry famille française. A Belgian couple who happened to also at Cyril’s stand informed me that besides participating in the gastronomic event that was being held that evening with Michelin starred-chefs like Oscar Garcia of La Table d’Uzès and (now Michelin starred), Jérôme Nutile, Mr. Marcolini was sure to also be at the Truffle market the following day. Oh boy!

Eric did his shopping to prepare for our weekend feasting – of course with truffled delicacies, but given how close it was to lunchtime and given that we were with a newborn and our hungry toddler, we thought we’d better go and try out one of the truffle menus that was being proposed by the local restaurants. We checked out Midi à l’Ombre which Eric had wanted to try for some time. They’ve recently undergone quite a renovation, modernizing their space. The outside garden looks promising but it was way too cold that day to even dream about eating outdoors.

What I particularly appreciate about certain restaurants we’ve been to is the options they provide for kids. Instead of having children eat plastic or reheated foods, many offer the same options they have for adults but in more kid-friendly portion sizes. Happy to say that Midi à l’Ombre was one such place. Remi is a good eater so this is always lovely to have. He even had his meal with truffles! Quel gourmand!

Overall we were satisfied with our meals and I would very likely return particularly to sample their garden for an evening drink or late supper. I had a confit de canard with truffles – give me a confit de canard anyway you like it and I’m a happy lady.

After such a filling lunch we decided in the evening to have a more casual affair and dined on charcuterie and those excellent snails from Mr. Santos. Remi is a huge fan and has been since he was 13 months old! If we left him the plate he would have polished them all off, all on his own.

The adventure continues in Part II where you will also find Chef Eric’s truffle inspired recipes, so do read on

Enjoy one of our French cooking Classes in Uzès. Provençal and Mediterranean Cuisine. Small Classes taught in English. Book a class with chef Eric. For a week of French culture, cooking, touring tasting and more, join us for a Week in Uzès.