The weekend of truffles continues on in Part II of my Truffle Weekend in Uzès. Read on and grab the two truffle-inspired recipes from chef Eric. 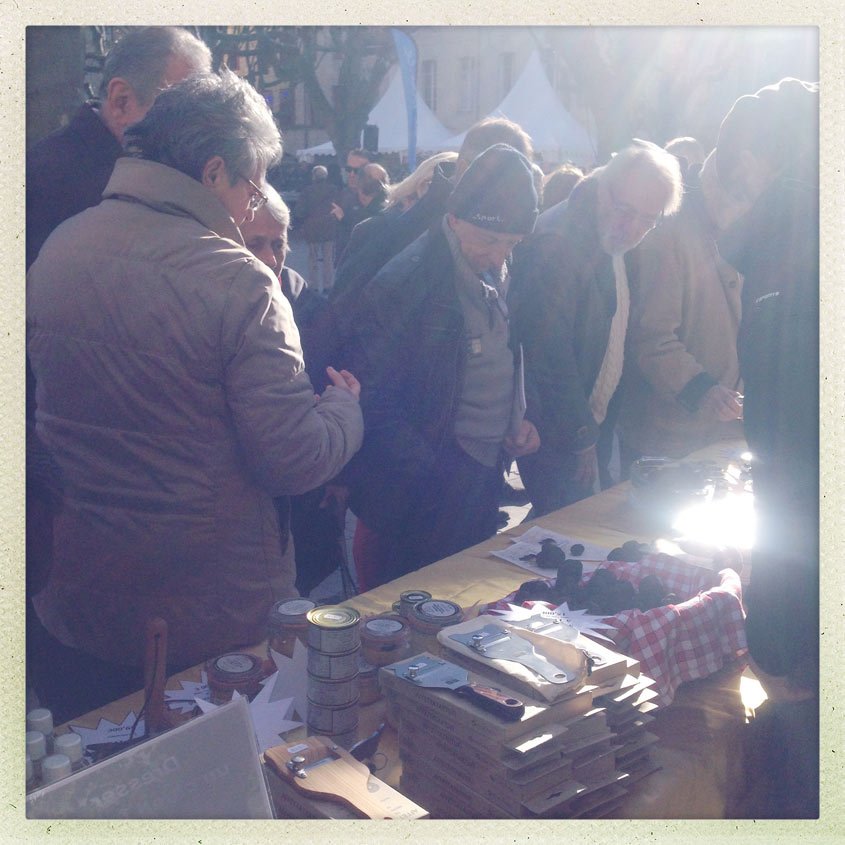 Truffle Market Day: We prepared ourselves the following morning to head back into town as early as our wine-filled heads and our little ones would allow, as we were told to expect a crowd . . .

The Sunday truffle market was packed! The tables from which you could purchase the various harvested truffles were under the arcades on the Place aux Herbes. Famous people who I could not identify – but who clearly were famous given their entourage, were pressed up against the vendors’ tables. 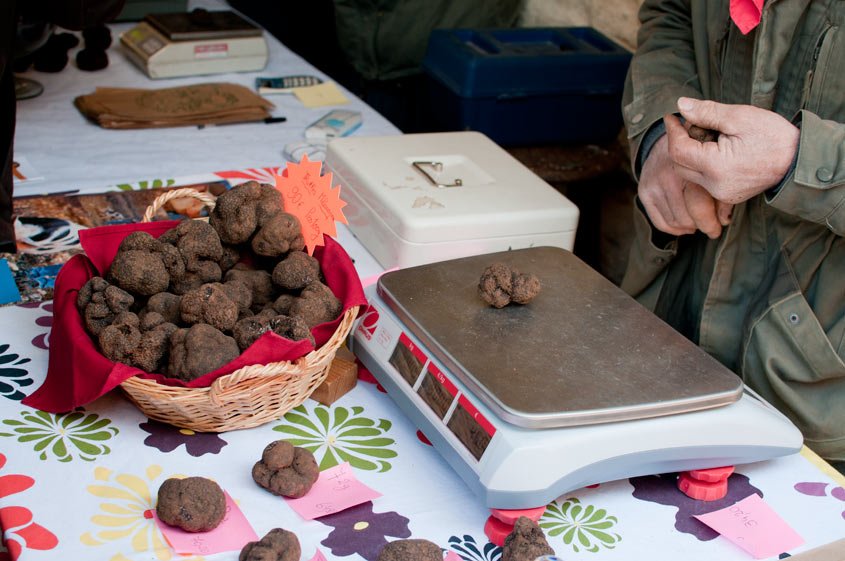 On our way to the place, I passed Pierre Marcolini heading out! He was going so fast, I didn’t have time to react. Darn! But this was not to be my last sighting. I am no celebrity chaser but when it comes to chefs I admire, you could think I was running after a rock star.

The first thing that hit me when we passed under the arcade was the smell of truffles that filled the air, in that intoxicatingly delicious aroma that you can only associate with the spore. Various vendors proposed Mediterranean delicacies all dripping in, prepared with or accompanied by, truffles. 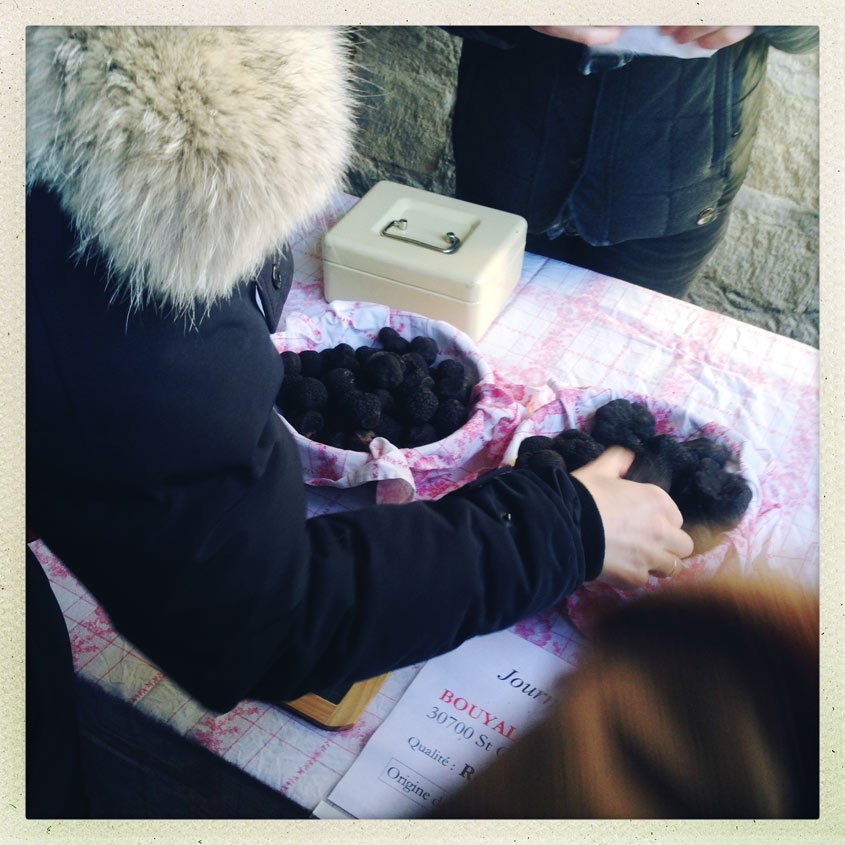 The black diamonds were spread out everywhere. Anything and everything having to do with truffles, was for sale including the small oak plants that would someday become trees under which (hopefully), the truffles would sprout.

The city had organized a ring where we admired the skills of numerous dogs whose masters were hoping to prove their worth in finding the buried truffle. But the pig outsmarted them all, having no trouble at all digging out what he thought was a treat.

I am told people prefer these days to use dogs as they are less likely than pigs, to eat the truffle before you can get your hands on it. 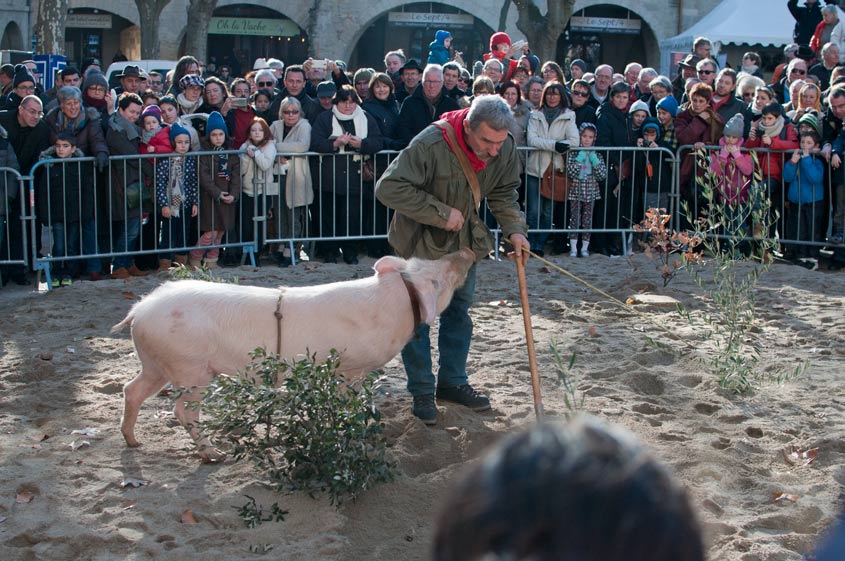 I turned around just outside the Terroir restaurant and there he was, Mr. Pierre Marcolini in the flesh – Mon Dieu! Did I say that I am not generally star-struck? I went for it – I think giving birth to my son has certainly made me a bolder person. “Mr. Marcolini?” “Oui”, he replied. I went on to tell him that I truly appreciated his wonderful chocolates and wanted to thank him for his great work; would he mind me taking a photograph. And then it happened, he suggested that it would be better for us to take a selfie and so, not wanting to leave my equally struck friend, Cécile, out of the mix, I asked him to hold on while I grabbed her, and Mr. Marcolini took my iPhone and snapped a lovely photo. The best photo actually came from Cécile’s boyfriend taking a shot of the whole scene – priceless.

We left the market to head to Le Tracteur in Argilliers, which has organized a musical truffle tapas. All in all a wonderful day in the South of France. I had my first ever baba au rhum au poire et truffe. Just look at the amount of shaved truffles on top. You know what? It wasn’t bad at all.

Now, what did chef Eric prepare for us this special truffle weekend? Well he went through a number of creations that weekend but I decided to highlight two of the dishes we enjoyed: the Brouillade de truffes – a very fancy way of saying scrambled eggs with truffles – a special treat for you egg lovers (I am not one) and the truffled risotto with scallops and coral sauce (recipes to follow). 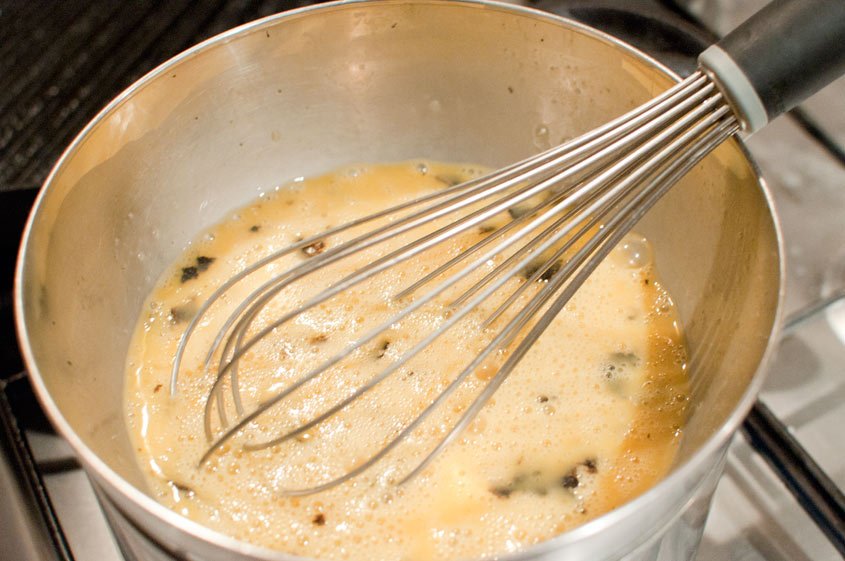 I don’t do eggs. I used to, but one day, I just had enough of them, so generally if eggs happen to be a major part of any recipe, I’m not interested. So while Eric and our friends relished their brouillade de truffes, I had myself a less eggy meal. But risotto . . .  Give me any dish with rice involved and I’m a happy gal. Rice, after all, was the first thing I ever cooked at the age of 9. It seems that the French have embraced this Italian rice dish and made it their own. It is, I’m told, the most common dish using truffles that you will find in France. But common by no means banal so prepare your taste buds.

Join us in the South of France, in Uzès, for our French Cooking Classes offered in English.

In a stainless steel bowl:

Start with the risotto:

A 2-day virtual bread baking course taught by chef Eric. Master the art of bread baking from the comfort of your home kitchen. A bread-baking course for all lovers of great, homemade bread. Come bake delicious bread with us!
120€ / person for 2 days
BOOK NOW
View all Courses