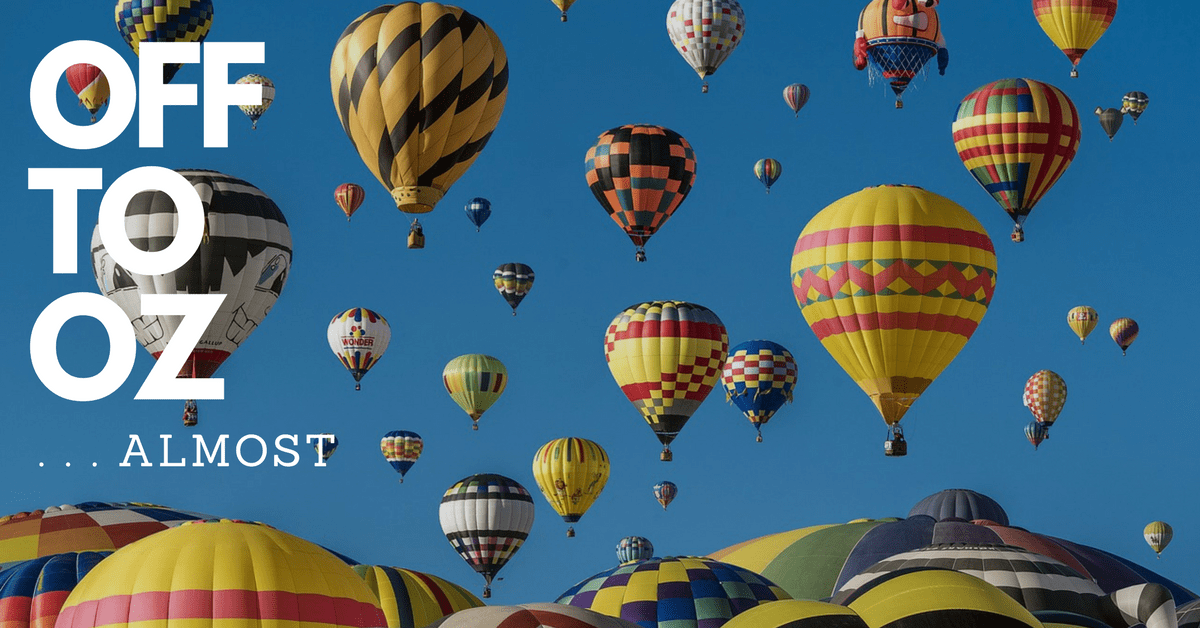 It happened again! We had to wait 2 years for it but it happened – that magical Oz moment of my childhood dreams. Let’s forget that with age and height I suddenly became a little more terrified of heights than I used to be. I’ve jumped off a cliff to glide over the beaches of Rio – only had my eyes shut for 5 minutes. I’ve hiked up volcanos & mountains (as long as I don’t look down, I’m just fine). I’ve ridden in the tiniest helicopter and it wasn’t till towards the end that I really needed that thing to land. But my ultimate dream? A hot air balloon, that’s what!

You can spot the balloon often enough in the skies over Uzès – even spotted them over the Intermarché supermarket in Montaren. They go wherever the winds are pulling them (not too much, not too little).  I’ve been told that as they are at the mercy of the weather, they could call you up the night before a possible flight to either cancel or be up and ready by 4 am.

We’ve sometimes had the pleasure of hearing them when they blast the fires as they pass over our house. While I have been into a balloon once, in Paris at the André Citroën park, it was tethered to the ground and there was no hot air – not fair. So when I heard about the Envolée Céleste coming back again, I was all about it. I have to say that the price of a ride calmed me down a bit but I suppose if you share a ride with a few friends it could be doable.

It was a beautiful (warm), October day in the Pays d’Uzès. Apparently too warm for the hot air balloons though. Something about up-winds of hot air making it possible that the balloons would take off to far off lands. Remi (our soon to be 4-year old), was invited to a birthday party of one of his classmates and the child’s mother had the brilliant idea of holding this gathering at the Pont du Gard.

While we waited for the big show, our kids got the chance to write out cards (or have mommy and daddy write them out and attach them to balloons that would be released (so they said), at the same time as the hot-air balloons. Nature sadly had a completely different plan though.

I was all poised and ready with camera, tripod and as much patience I could muster up. But they just weren’t taking off. Ugh! Just when I had to leave (due to another pressing engagement), they started their “engines”. It just wasn’t meant to be this time I guess but I did catch a few photos of the fanfare and balloons filled with Helium taking to the skies. I wonder who (if anyone), will get my son’s card.

So see you in 2 years unless I work up the courage and save enough pennies to do it for my birthday in May!

You can catch the next Envolée Céleste in 2 years I believe but in the meantime, if you are looking for an unforgettable experience in Uzès, why not take your own hot-air balloon flight with Sud Mongolfière?


If you’re looking for more things to do in Uzès, come join us on one of our market visits with a French Market cooking class.

An online quick French bread baking class. Join our chef in preparing easy to make French bread rolls from the comfort of your home kitchen. This is a one day class. Learn bread recipes that you can customize & make your own.
60€ /person
BOOK NOW

Tapas, apéro, aperitivo, whatever you call it, this is one delicious class. Come and learn Provencal and Mediterranean small plates to accompany your next cocktail hour. Perfect for those looking for appetizers to add to their menus.
60€ /person
BOOK NOW
View all Courses